Things I learned in Las Vegas

1. It is psychologically more satisfying to treat penny slots as really odd arcade games, than as sources of wealth.  If you play with the goal of playing the wacky mini-games, it’s much more fun because you are never going to win anything exciting.

4. Related:  if you are playing a Star Wars slot machine and you suddenly get the urge to hit the max bet button, DO IT. This is the Force telling you you’re about to get the Death Star bonus, and your $4 could be $40. Don’t listen when the Husband disagrees with the Force.

5. If you are old enough to know the signs that indicate internal bleeding, you are too old to be drinking giant novelty daiquiris full of  blue dye. WAY too old.

6. If you have a con-costume you don’t know what to do with for most of the year, you can wear it on Fremont Street, and tourists will give you tips to take pictures with you. Elvis, I get. Showgirls, I get. But Davey Jones, Darth Vader, and a ninja?

7. Tipping housekeeping is always a good idea. Not only is it the polite thing to do when you’re asking someone to clean up six people’s worth of beer bottles and crumbs, and clean the toilet you yakked in, but you’re likely to score on toiletries: 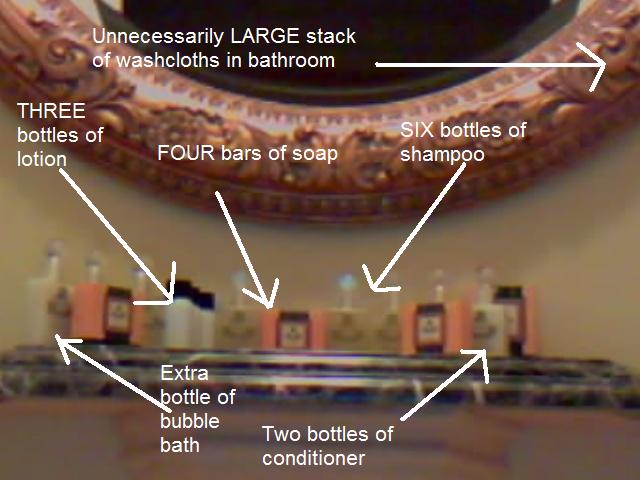 This ALL showed up one day on that little shelf.

10. Someone should make topless ballet happen in Vegas.

12. Even if you learn all the rules to Blackjack, you will probably still lose.

13. Roulette is really just a flashy way for the casino to take all of your money and laugh at you.

14. When the mini-bar prices start to sound reasonable, it’s time to go home.

This entry was posted in Uncategorized. Bookmark the permalink.

3 Responses to Things I learned in Las Vegas