Today, readers, I goofed. I locked the comments on the giveaway a day early. In my defense, I’ve got no idea what day it is. It’s 1 week post-baby. That’s what I know.

Anyway, comments are unlocked again until midnight (or whenever Itsy Mr. E wakes me up and I get a chance to lock them again. In the meantime, I noticed we hit 175 comments! Which means I promised you an excerpt.

This is just the teensiest bit spoilery. If you like going in cold, I’d suggest you should skip it. But you find out who Sessaca is pretty quickly after you start.

Even with the promise of good Chessentan black, Granny Sessaca did not take kindly to being roused from her seat by the fire, especially not when Dahl insisted that she go upstairs to the chilly third room where the children all slept, the only room of the little house that was abandoned this time of day. She insisted, wearily, that she had to stir the fire until her husband came home with the good haunch of venison he promised.

Bodhar winced. “She gets like that sometimes lately,” he whispered to Dahl. “Forgets things. Maybe we should wait.” He tapped his hand against his leg. “You going to tell me what’s going on?”

What was going on, Dahl thought, was that Mira was already scaling the drainpipe, letting herself in the window upstairs. And the barrier between Dahl’s Harper life and his Harran life was growing dangerously thin.

“Go get Thost,” Dahl said. “And don’t breathe a word of this to anyone.”

As much as Dahl didn’t want any more members to this conspiracy, Thost was strong enough and swift enough to scoop Granny from her chair and bring her upstairs. Bodhar carried up the rocker after him and a rug for her lap besides.

“What is this?” Sessaca demanded. “Your father will be very upset with you boys. You’ll get the switch, I’ll make sure of it.”

Dahl pursed his mouth. Barron, Sessaca’s only son, had been dead for several years now—bringing him up, forgetting the passage of time. She was upset and there was all the chance Mira was about to upset her more. Maybe Bodhar’s right, he thought.

But Mira remains, the question remained—the Zhentarim remained. They were coming one way or another and if he didn’t have an answer to hand them before then—

Thost stopped dead in the doorway at the sight of Mira. “Who in the sodden Hells is that?”

“A friend,” Dahl said, setting down the teapot. “She’s got questions for Granny.”

Sessaca looked up at Mira, adding the shriveled tea leaves to the hot water, as Thost set her carefully down in the rocking chair. “And who’s this? A little playmate? I don’t like the look of her.” She peered at Mira. “Who’re your parents, girl? I’ll not have my grandsons bringing urchins into this house.”

“The Black Network sent me, old mother,” Mira said flatly. “And I brought you tea.”

“What the sodden Hells?” Thost hissed. “Godsdamn it, Dahl, what are you doing?”

For a moment, Dahl wondered the same thing. But then Sessaca’s expression shifted—if he hadn’t trained himself to spot such things, he might never have noticed. She still watched Mira, puzzled, weary, but Dahl couldn’t deny that a certain cunning had overtaken her.

“I beg your pardon, girl? The what now?”

“Old mother, don’t play that game,” Mira said. “Maybe your grandsons will believe your mind’s not sharp, but I’ve read the records. I think I know you better.”

Sessaca leaned back in her rocking chair, silent for a moment. Weighing the odds. Dahl nearly cursed aloud. Mira was right.

“Sounds wicked,” Sessaca said, not conceding but not speaking in that trembling way she’d used before. “Sounds like a pack of rogues who might try and kill me where I sit.” She set the chair rocking, toying with the heavy gold locket she always wore. “But that hardly seems wise, girl, when I have my three strapping grandsons on guard like this. Do you think you can take all three of them on?”

Sessaca chuckled. “I’ve forgotten more than you’ll ever know. And I don’t break the covenant. Your masters have aught to fear from me.”

“My masters would agree. Although they’d prefer to come line your family up and make you remember with a good bit more blood on the floor, just to be certain. I need to know where the Master’s Library is. You want to keep yours safe. Can you help us both, old mother?”

Sessaca turned to Dahl. “Is this what you’ve been mixed up in? What are you bringing into this house?”

Dahl nearly laughed. There was never a border, Dahl realized in that moment, never a division between the life of secrets and the life of simplicity. He’d been born into a world where they were already blurred and blended in a thousand ways.

“She wants to know where the Master’s Library is,” he said, “because a Zhentarim agent named Sessaca Peredur was the last to see it, sixty years ago. And if there were another explanation in the planes above and below, I’d like to hear it. But it was you, wasn’t it? You were the agent. You probably never left. That’s how we always get the best prices on the rye crop, why the Burgher’s collectors would miss Grandda in lean years. You’re the same Sessaca Peredur, agent of the Black Network.”

Sessaca folded her bony hands together, looking irritated. For a long moment, she said nothing and Dahl found himself hoping beyond hope that he was wrong.

Bodhar’s eyes looked as though they might pop out of his head. “Granny?”

“Is it so hard to believe?” she asked. “I was someone before I ever came to this dale, after all, before I ever met your grandfather, gods care for his soul. Why would I throw all that away when he needed it, when we needed it? Don’t paint me a blackguard though, lambkin. I haven’t earned that.” She turned to Mira. “You, on the other hand, I still don’t like the look of. The Master’s Library is nothing but an empty tomb. What do you want there?”

“Of course, it matters. It’s something serious if you’ve managed to track me down all the way out here. If your superiors are willing to kill for the answer.”

Mira hesitated and Sessaca nodded sagely. “They’re not telling you everything, are they? Typical. But if you won’t tell me, then I’ve no way to decide if you need it.”

“Old mother, please,” Mira said. “I’m no killer, but my employers are dangerous souls. They won’t ask you nicely or bargain with tea. They’ll—”

A crash from downstairs, a startled cry. The sound of booted feet.

ASHES OF THE TYRANT Giveaway!

THIS GIVEAWAY HAS ENDED! Thank you for participating! Winners will be announced shortly!

Okay readers: It’s 39 days until Ashes of the Tyrant can land in your hot little hands. That means….giveaway time! 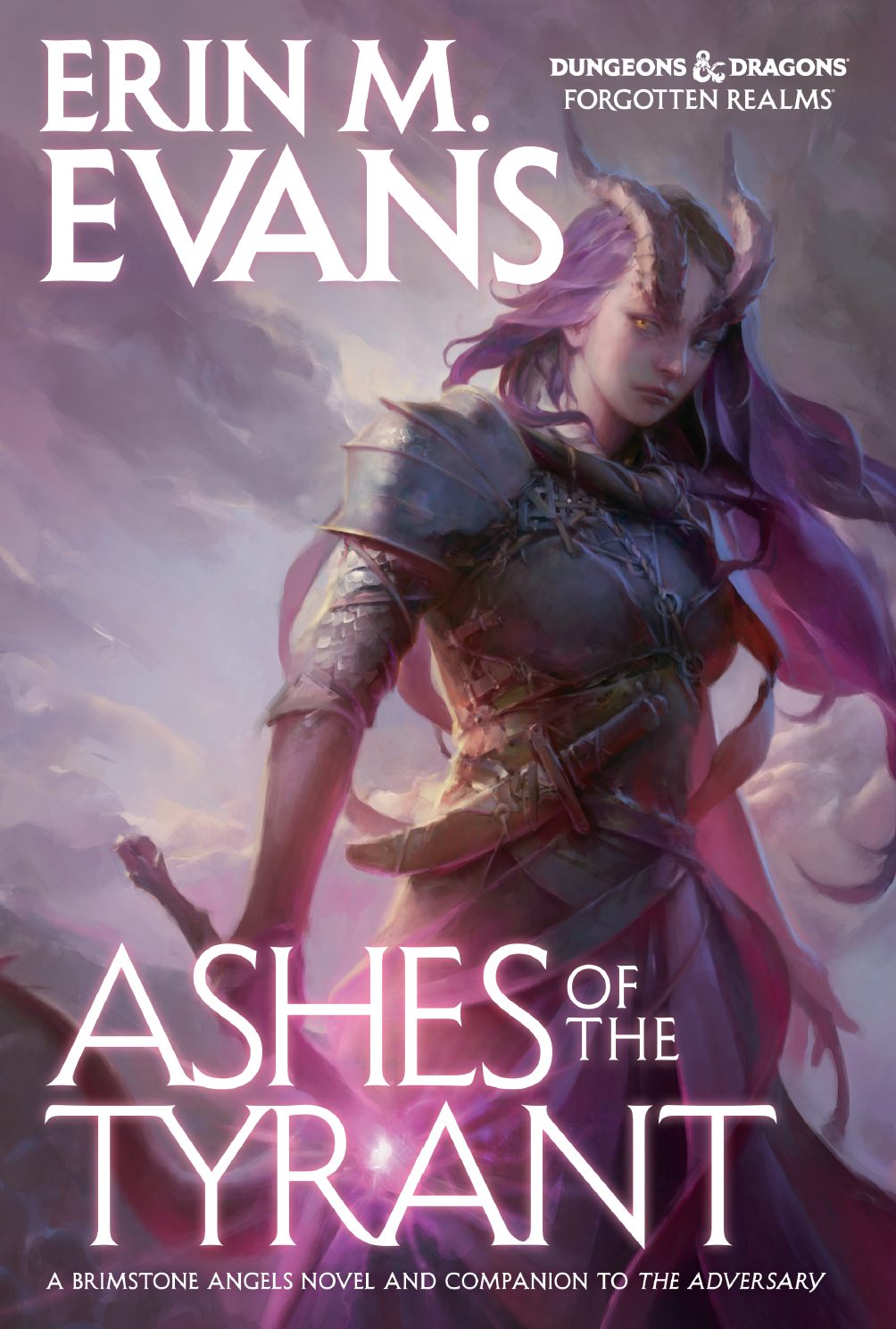 Is she standing on a pyramid? Yes she is.

What’s it about?
After the events of Fire in the Blood, Farideh, Mehen, Havilar and Brin head to Djerad Thymar with Kepeshkmolik Dumuzi at the behest of Mehen’s aunt, the Verthisathurgiesh matriarch, Anala. But what they think will be a quick stopover turns into something far more dangerous when Anala’s son turns up dead in the catacombs along with a dozen other young dragonborn.

Meanwhile Dahl Peredur is in Harrowdale, trying to find a way out of his deal with Lorcan, when a certain Zhentarim agent tracks him down, looking for lost information about an ancient site, The Master’s Library. As much as he wants to keep his Harper life separate from his family, a lost Zhentarim outpost and a family secret mean he won’t get that chance.

That’s…not a bad summary!
I know, right? I’ve been practicing since last year.

I would read that.
You can start with this sample chapter if you like.

I still have to wait 39 days for the book though. Why are you even bringing this up??I told you:  it’s giveaway time! You know what to do!

1   Make a comment on this post. You are going to have to leave an email address to do this, but that’s good, because if you win, I will have to have a way to contact you! It must be on this post at slushlush.com, or I won’t count it.

2  In your comment, tell me your favorite nonhuman fantasy race/species. Since Ashes of the Tyrant is where the dragonborn shine, let’s celebrate those peoples who aren’t just like us. They MUST be fictional, but you can draw from books, movies, comics, or TV, and they need to be nonhuman. There are lots of cool human cultures in lots of books, but that’s not this contest. Feel free to include links—we all love being introduced to new stories.

3  From the pool of comments,  Because at least 100 people have entered, I will give one winner signed copies of the entire Brimstone Angels Saga, and three winners copies of Ashes of the Tyrant!

If you’ve followed along with these giveaways before, you know that’s not all.

The contest runs through December 22. I will draw names and announce winners as soon as I can after that. You all should be aware I’m expecting a baby and due December 15th, so there’s a chance you might have to be a little patient as I might literally be in labor when the contest ends.  Only one entry per person, but please pressgang your friends. May the odds be ever in your favor, etc.,etc.

I’m panicking! I literally can only think of elves! Everyone will laugh at me!
Elves count! If you love ’em, you love em.

I already have copies of those books.
The nice thing about getting a signed copy of a book you already have is that it gives you a ready-made gift for someone else. Got a DM who’s gone above and beyond? Got a friend you know who would love some Realms novels but doesn’t know where to start? Got a Secret Santa coming up? Ta-da!

Get commenting! (And come back to check out other answers!)

Few additional questions:
If I buy a copy of the book through the esigning and I win, what happens?
You can choose to cancel your order, or have two books and be the coolest kid on the block.

If I won your last contest, am I ineligible?
Nope. Different book, different contest. The only thing that makes you ineligible to win is being me or a member of my immediate family. Because, come on. Especially, you, sister who is two books behind.

I am not from the US. Can I enter?
Yes! But be aware that I may need to choose a slower form of shipping to accommodate you in a way I can afford.

Playing a Dragonborn in the Realms, Part 3: The next generation

Since you all helped me raise such a lot for Extra Life, here is a third installment of “Playing a Dragonborn in the Realms.” This one focuses mostly on sex, marriage, and children–topics that might seem out of place in a game, but which can shape a dragonborn character’s life in profound ways.

Incidentally, this is great background material for Ashes of the Tyrant.